Here we explain the common propeller terms, their shape and how they work. There is a lot of literature to be found on propellers for those who want to go deeper into the subject, but we intend to keep it simple for the layman to understand. 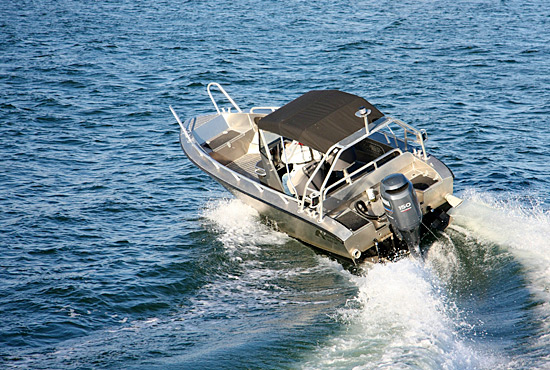 Although a propeller is sometimes called a screw, it does not work like one. The propeller blades are shaped like wings and rely on the three crucial properties, pressure thrust and resistance. The blades are mounted onto a rotating hub where the thrust draws water upstream and then throws it downstream of the boat’s wake. Newton’s third law of “action and reaction” makes the boat go forwards.

The pitch is the distance that the propeller would travel in one revolution if there were no “slip”. The pitch is measured in inches and is determined by the angle of the blades. It should be noted that the pitch may not be the same throughout the blade. Since it is the pitch that provides the propellers drive, it is not unusual for the pitch to reduce at the root of the blade as the oncoming water has lower velocity at the hub.

The diameter of the propeller is measured in inches and is a circle formed by the tips of the blades as the propeller rotates. (1” is 25.4mm) Most propellers are marked diameter x pitch (for example 13” x 21”)

A common way to adjust the metal propellers when applying a so-called cup on the blade trailing edge. That compares with a small flap on the trailing edge of an aircraft wing. It gives the blade pitch increases, but also under the pressure of the blade leading edge spread out a bit and can in this way prevent cavitation. 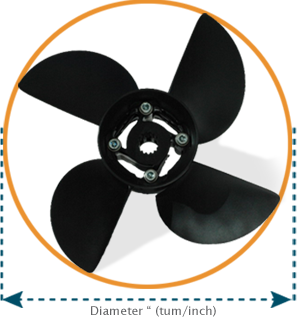 As the previous discussion, it is the lift of the airfoil that provides the propulsive force, while the resistance requires enginepower. There are however, a characteristic of airfoils which may be used to maximize the efficiency and it is having the right angle of attack to the water. For a given speed and rpm is the propeller pitch which should be amended to obtain a more economical propulsion.

To get your new propeller blueprinted you send it back to the manufacturer or a propeller specialist who performs fine adjustments to the form as it have been stated in the manufacturing drawing. This is mainly valid for propellers made of metal. Deviations in the shape of the blades and angles are from the manufacturing process where as always occurring tolerances. Typically, these tolerances are within an range that works just fine for normal performance and usage.

Rake is the angle of the blades on the propeller shaft and is designated as positive aft. A rake shape the blades into a cone and ensures that concentrate the water jet, as it prevents water from leaking out radially. Especially for surface-piercing propellers have a positive effect. In some contexts pushed the bow of the boat upwards with increasing rake. A sheet may have progressive rake also can rake cuppas.